California SB199 - What it means for you 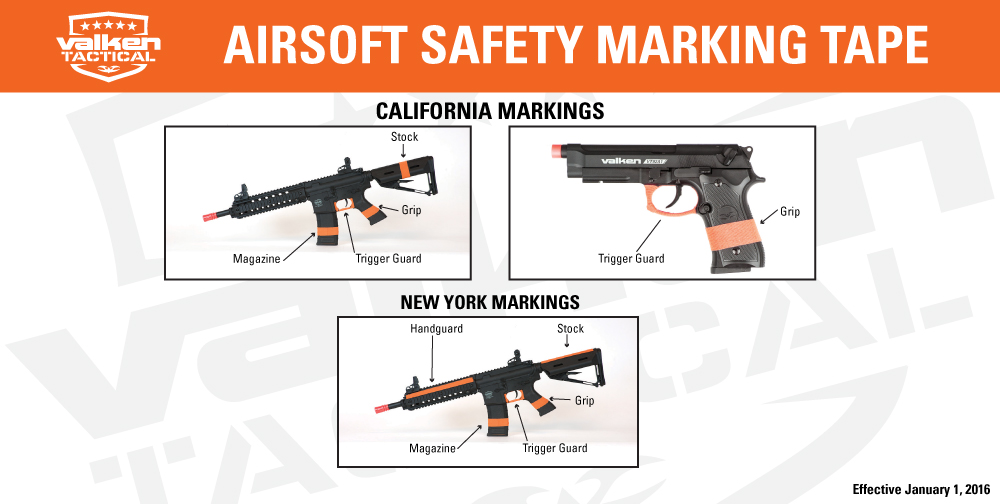 You may remember the uproar in the airsoft community back in 2014 about California's SB 199 bill regarding changes made to airsoft guns. Well, it went officially into effect January 1 of this year and while it isn't nearly as bad as we all thought it would be - it has meant required changes and some very strange alterations. California and New York are now requiring bright neon colored tape to be placed on the magazines, grip, stock and trigger guards of all airsoft guns.
It is believed law enforcement officers will see this tape from afar and know its airsoft. (yeah- we know what you're thinking and we're thinking the same thing.... but whatever.)

Overall, California SB 199 has this requirements: (4) A BB device that is an airsoft gun that expels a projectile, such as a BB or pellet, that is 6mm or 8mm caliber which meets the following:

(A) If the airsoft gun is configured as a handgun, in addition to the blaze orange ring on the barrel required by federal law, the airsoft gun has a trigger guard that has fluorescent coloration over the entire guard, and there is a two centimeter wide adhesive band around the circumference of the protruding pistol grip that has fluorescent coloration.

Lawmakers are trying very hard to add an amendment to the bill requiring the ENTIRE airsoft and pellet gun be brightly colored instead of just the guards and bands, but the airsoft community was able to band together in force before - so I don't think they'll be able to change it.